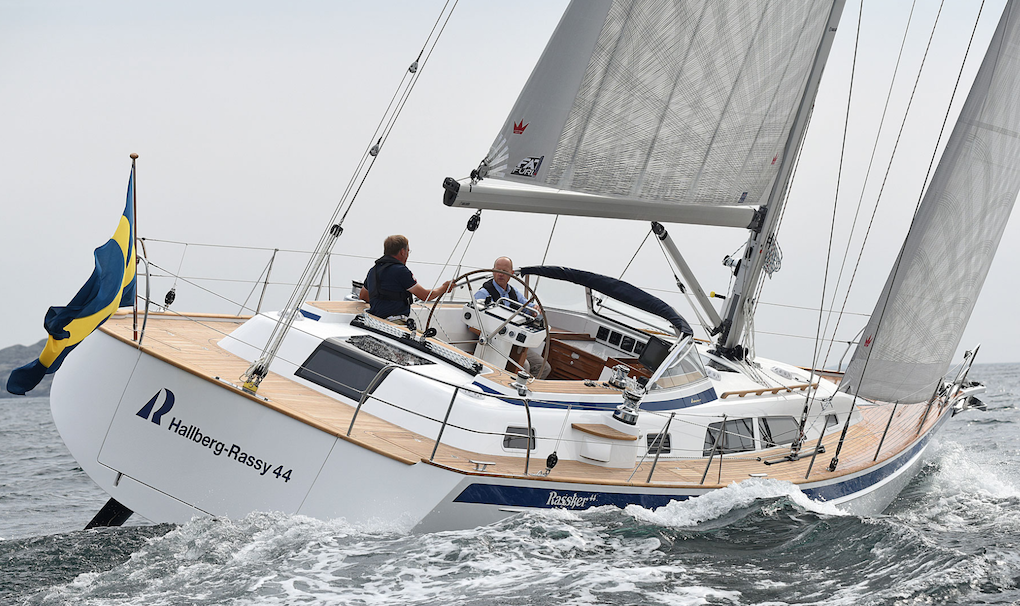 Så här skriver man om Hallberg-Rassy 44 i januarinumret av Cruising World: So Sweet, So Swedish. For the 2020 BOTY contest, nobody was going to deny the all-around oceangoing excellence of the sweet Hallberg-Rassy 44, which was unanimously named the Best Midsize Cruiser Under 45 Feet. There’s no question that the Hallberg-Rassy benefited from a test sail conducted in truly sporty conditions, with gusts in the 20-knot range and a substantive seaway running, which the yacht purposefully muscled through. The 44 is built to Nordic standards for North Sea conditions, and it showed. “It’s just a solidly built boat,” Sherman said.

“We had the pleasure of sailing it in a pretty strong breeze, and it just went through the water with no effort. It was just doing its thing and loving it. All the equipment they use is Grade A.

“Judge Ralph Naranjo concurred with his colleague’s assessment. “Externally she’s a sound, ruggedly constructed vessel,” he said. “But more to the point, there’s integrity to how the systems are installed. Looking over how the autopilot goes in, for example, the bracketing can be as important as the selection of the autopilot itself. It’s very well-situated because the bracket is secured to both a transverse and longitudinal member. There’s no shoehorn effect. “In fact,” he continued, “you lift up the aft bunk and look at all the other equipment installed in that space. It’s almost as if there were laboratory testing going on there, and you have access to all of it. The entire boat is like that. Everything from the bow thruster to the anchor windlass showed that same attention to detail. And to me, the integrity of the builder showed through in the quality of the product.”

“Yes, the quality construction was mainly what got my vote,” judge Dan Spurr said. “We didn’t find any real shortcoming. Everything seemed well-done. The joiner work was tight. The woodwork inside was beautifully done. It sailed well. And I like the Hallberg-Rassy windshield. The vast majority of sailboats have a canvas dodger with vinyl windows. Eventually, the canvas wears out and the vinyl gets cloudy. The supposed virtue is that you can put them down, but nobody ever does, it seems. With the windshield, you can add a canvas top, but it offers protection in a more permanent way. I appreciate that utility. The little things added up here.” And the finished product was a winner.